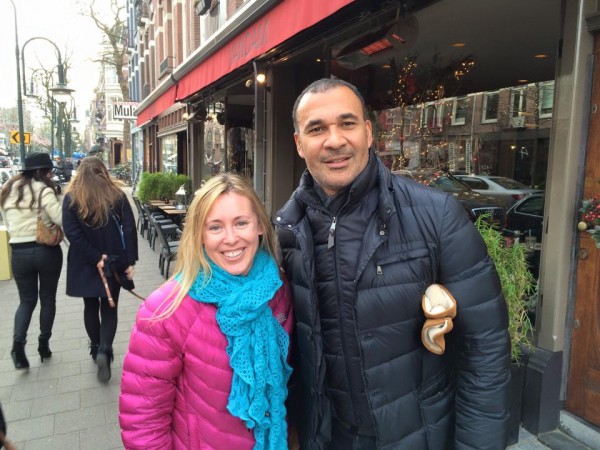 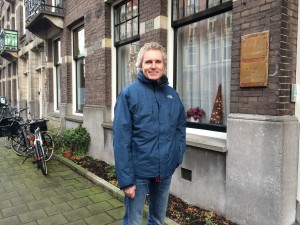 Memories from a year ago today…

This photo popped up on my Facebook timeline today, so I feel compelled to re tell the story about this big day in Amsterdam! It was going to be an extra special day, Stefan and I were in Amsterdam for his green card physical…a day we had waited months to arrive (here’s Stefan in front of the only Dutch doctor’s house/office who can do a green card physical… payable only in cash!)! Walking to the doctor we ran into (almost literally!) Dries Roelvink (who?! apparently a famous Dutch singer). Dressed to kill in a 70’s style track suit, I might add. After Stefan’s much awaited physical, we had lunch in the Old South District at Van Dam Brasserie (think Hollywood of Amsterdam). We noticed the entire restaurant kept staring at the table right next to us (this is the ONLY place in the Netherlands I’ve seen botoxed women!). Stefan realized it was THE famous Dutch soccer player – Ruud Gullit (who?! the Michael Jordan of the soccer?!) sitting with Edwin Smulders (again, who?!)! Edwin (photojournalist…uh, really… the paparazzi) also happens to be married to one of Stefan’s fellow Barnevelders (top model!) who Stefan grew up near.

My apologies to the Van Dam Brasserie as I really can’t recall what we had for lunch that day! I do remember it was very busy, so it must have good food or just celebrity wannabes. But, it was the best people watching day I’ve had in a long time! I do admit… I felt a little guilty this was all wasted on me since I had absolutely no idea who any of these people were! As we were leaving the restaurant the famous peeps happened to come out after us. I’m by no means a shy person… but my best friend can attest (we had a celebrity spotting day in NYC years ago) I don’t usually feel the need for autographs or stalking famous people. But how would all of this even be believable without some type of proof?! So I told Stefan to grab his phone as I walked up to Ruud. I introduced myself as an American who had no idea who he was, but could I have a photo with him for my Dutch nephew (for the record, Stefan really does have a young Dutch nephew who loves soccer!). Not much chitchat (to be fair, not sure how much English he speaks), but he nicely obliged before he zoomed off on his scooter (definitely couldn’t make that up!)!

Apparently Stefan passing the physical for his green card wasn’t enough excitement for that day! If we ever move to the Netherlands, I’ll be offering celebrity spotting tours. 😉