Today is Veteran’s Day in the States and it brings back many memories of my visit to the The World War II Netherlands American Cemetery and Memorial near Maastricht (in the south of The Netherlands). My husband took me to see the memorial during one of my first trips to The Netherlands and it was truly a moving experience! After spending more time in The Netherlands I’ve learned the Dutch people have not forgotten the roles Americans and Canadians played in their liberation from the Nazis. The memorial is set on 65 acres of land and was a gift from The Netherlands to the United States (so strange to be walking on American soil in Europe!). 8301 American men are buried in the cemetery, most who were killed in battles near this area. The walls surrounding the reflecting pools are inscribed with 1702 missing American soldiers. I found men’s names from every state and many from my “home” states of Iowa and Colorado. As my Grandfather served in WW II, this day was a strong reminder how lucky my Grandmother and his family were that he came home (and I also wouldn’t be here!). 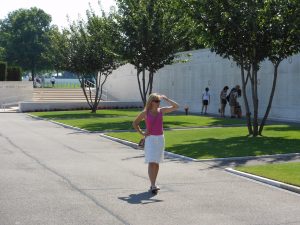 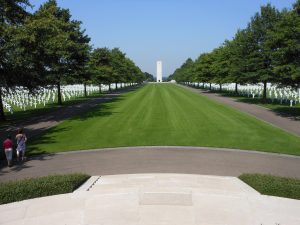 If you visit The Netherlands (or live there!) I highly recommend a trip to this memorial! The American Military Cemetery is located in one of the most beautiful parts of The Netherlands with it’s rolling hills and picturesque landscape. Since it’s off the beaten path of where most tourists travel; the day of my visit I was the only American signed into the guest book (rest assured Americans – this memorial is meticulously cared for by the Dutch people!). People from many countries were there paying their respect and learning more about the nearby WWII battles. You can read more about the American Military Cemetery and the hours of operation here.